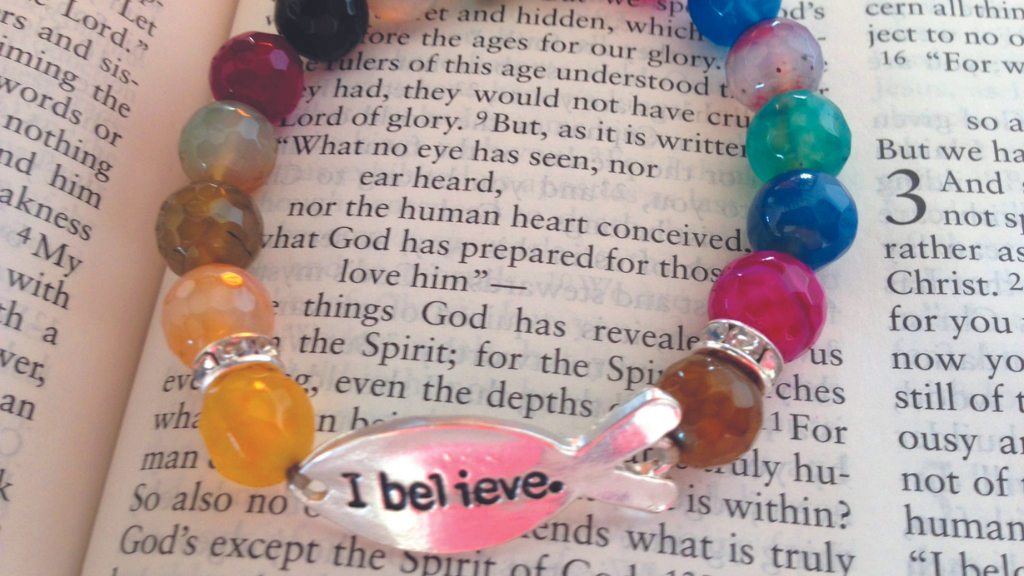 I believe the Holy Spirit speaks to us in very powerful and personal ways. In those unexpected moments we have the opportunity to grow closer to the Divine as God pulls us near and allows us to write our stories.

Not long ago, the Spirit enveloped my heart when I heard a report on the radio about a woman who became a living kidney donor to a stranger. I immediately made a list of all the reasons I should be a donor, too.

The right timing makes a huge difference, and the time was now. Kids nearly grown? Sick leave accumulated? Great health? A strong desire to help someone in need without any compensation? Strong marriage? Yep, yep, and yep. And it met every Enduring Principle.

I could find only one reason not to become a donor: an incredibly painful surgery. It would involve a lengthy recovery and, of course, living the rest of my life with only one kidney—all for the compassion of a stranger. Hmm…

I believe the Holy Spirit speaks to us in very powerful and personal ways. In those unexpected moments we have the opportunity to grow closer to the Divine as God pulls us near and allows us to write our stories.

I felt the Spirit’s presence as I pondered the possibilities of God’s plan for my life, and more importantly, those lives yet to be touched. I couldn’t let this go, because it wouldn’t let go of me. There was much more to this plan than an impulsive thought from a radio story.

It was burning in my soul, and it felt like love…like, faith in action. Was it possible that God really wanted to use me as a vehicle to change lives in ways beside my other professions as an elder and a nurse? I believed so.

But my husband thought I was out of my mind. We researched the good and the bad of all the possibilities. We talked to doctors and looked online. I read everything I could find, and I simply decided to leave it up to God. Prayer and scriptures are my go-to tools in making tough decisions. A few months later, I had decided to start testing through a transplant program in Oklahoma City, Oklahoma.

I also made two friends online during my research through the website I heard about on the radio. One was the older sister of a boy in need of a kidney. They lived in Houston, Texas, and were Muslims. My other friend lived in the Bronx and was a transplant candidate. She had a thick New York accent. If that isn’t Unity in Diversity, then I don’t know what is.

While I still was questioning my sanity, the Spirit answered me one night when my dad and a band we sing and play in were asked to perform in a nearby church that hosted a charity benefit. Unbeknownst to us, the charity was LifeShare, an organ-donation program, and the speaker was the parent of a kidney recipient!

I wanted to be a donor for one of these individuals, but it didn’t work out. Instead, they became an extended support system, and I became theirs. I did figure out one thing: I wanted to start a chain of donations. I felt strongly that this was God’s plan. I just didn’t know when, where, or who,— yet.

About three months later I had completed all the testing to prove I was a suitable donor. I hated the idea of surgery, but I really looked forward to watching God’s plan unfold. It was sort of like a mystery with a new clue around every corner. Who would it be?

While I still was questioning my sanity, the Spirit answered me one night when my dad and a band we sing and play in were asked to perform in a nearby church that hosted a charity benefit. Unbeknownst to us, the charity was LifeShare, an organ-donation program, and the speaker was the parent of a kidney recipient!

I felt God’s presence stronger than ever! The next step was to place my information into the organ-donor database, where my DNA would be matched to potential recipients. Then more blood work and direct matching could determine if we were compatible. This was a big deal—one my family secretly hoped I would forget.

Then one day in late spring 2015, tragic news hit our family. My dad became increasingly weak. Doctors diagnosed advanced cancer that had metastasized to his liver. At the same time, my husband’s dad was diagnosed with end-stage Parkinson’s. Severe disability forced him into a nursing home.

I couldn’t understand why God led me so far into the donation process only to sideline our families with such devastation. Not only could I not donate to my friends, I might never get the chance to donate at all.

Instead, everything turned with an amazing plot twist only God could create.

When we are downtrodden, we turn to the sacraments. The gift of laying on of hands for the sick is powerful. In our darkest hour, right before the biopsy, my dad received this sacrament. God responded with the craziest diagnosis ever. Yes, my dad did have cancer, a very slow-growing, rare, and controllable type that invaded his liver and damaged his heart. But it came with miracles that involved monthly injections, a huge open-heart surgery, and a prognosis of many more quality years.

Dad’s tumors shrunk by almost half, his blood pressure returned to normal, and his prostate cancer PSA levels (which had nothing to do with his new cancer) dropped by half. He started planning his future again. One that didn’t involve funeral arrangements.

Unfortunately, however, my father-in-law did die weeks later. His passing brought my husband and me even closer together. We planned, and I helped preside, over his service.

By the fall I knew it was time. In November 2015 while my dad was preparing for surgery, I was matched with a compatible recipient 1,400 miles away!

The gravely ill woman had a daughter who wanted to save her mom but was not compatible. I was. She was a woman in her 60s and facing a life sentence on dialysis that likely would end in death in a few short years. Her daughter granted my request to further the chain by donating to a young woman in her early 20s on dialysis. God was and is beyond good!

We needed this experience. We needed God. We needed to feel Jesus Christ in action. And we all were able to give and receive God’s blessings because of it.

While at church on Sunday, the day before my surgery, I asked for laying on of hands for the sick, not just for me, but for everyone on my chain. The next morning, I checked in for surgery accompanied by my husband. The waiting room quickly filled with people awaiting their surgical destiny. I prayed a silent prayer for all of us.

The night of my surgery December 7, I lay in my hospital bed with all kinds of tubes attached, feeling like I’d been slammed by a semi-tractor trailer. Beside me were both my parents (dad still recovering) and my husband.

We were told my left kidney, which had a plane ticket to Baltimore, Maryland, had arrived safely and was working well in its new body. The next day, my recipient’s daughter gave up a kidney for her new recipient. And so, my little chain of two had begun.

Two weeks before our scheduled surgeries, my husband finally accepted what I felt led to do (another small miracle). My dad, after his medical ordeal, accepted what I wanted to do, especially when he learned it was another parent and daughter who were willing to walk the same tightrope as we were.

We needed this experience. We needed God. We needed to feel Jesus Christ in action. And we all were able to give and receive God’s blessings because of it. God’s unyielding love for us has brought forth unbound joy for several families all because someone believed.

What no eye has seen, nor ear heard, nor the human heart conceived, what God has prepared for those who love him.